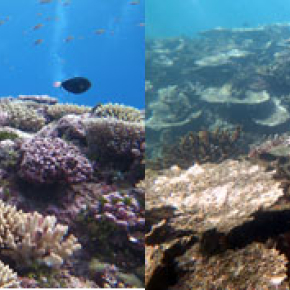 Double trouble for a coral reef

Environment
-A +A
Partager ce contenu

Upolu, one of the nine islands of Samoa, in the Pacific Ocean. Well-known among fans of diving, this isolated coral reef promised to be a site of rich biodiversity for the scientists on the Tara Pacific expedition, principally from the CNRS, the CEA1 and the King Abdullah University of Science and Technology (KAUST) in Saudi Arabia. Although some signs of bleaching had been observed on their route, the reefs of Upolu proved to be in a far more degraded state: coral cover is below 10% in over 80% of the 124 sites considered. According to the scientists, this situation can be explained by a combination of global and local factors. Their study is published in the journal Marine Pollution Bulletin.

Organized over a period of almost three years, the Tara Pacific expedition has made it possible to study some of the most isolated coral reefs in the Pacific Ocean. Indeed, given their isolation, many of these reefs remain scantly documented. This is the case of the Samoan Islands in Polynesia. The scientists dropped anchor in November 2016 in Upolu, one of the islands of this independent state. Its geographic situation meant that there had initially been hopes of finding a well-preserved reef. The available data and satellite images also pointed to a rich diversity of coral ecosystems.

Yet, once there, the researchers found a coral reef in very poor health. That is why they decided to conduct a more extensive study of the reef than planned: instead of considering three sites2, they selected 124 around Upolu—covering over 80 km of coastline—in order to inventorize their biodiversity. Each time, they noted their observations of the state of the corals and the behavior of fish. They also noticed that coral cover was below 1% in half of the sites they visited and below 10% in almost 80% of them. Another result, in most sites, was that the death of the corals was recent3. According to the scientists, the coral cover might have been between 60% and 80% at some sites even just two years ago.

Moreover, by studying two species of fish they had encountered in previous places the schooner had moored (Moorea, Aitutaki, and Niue), the scientists observed that the Upolu fish were smaller and that the number of individuals in a shoal was on average four to eight times lower than in shoals around the three other islands. In addition, they observed a tendency for fish to flee, which is thought to reflect intensive fishing pressure.

The cause of this massive deterioration? On the one hand, global warming, which heightened a classic meteorological phenomenon (El Niño) in 2015–2016, entailing increased coral bleaching4. On the other hand, local human activities, which are thought to exacerbate the effects of climate change. Indeed, in those sites where there is significant anthropic pressure, 30% to 40% of the dead corals are already covered with macroalgae (this coverage ranges from between 0% to 3% in sites further away from any human presence). The release of chemical substances, sewage, and waste, as well as overfishing, could be having an impact on the capacity of already weakened or damaged corals to recuperate. In contrast, the scientists observed reefs in better health within marine protected areas, a sign of the effectiveness of certain forms of management.

These initial analyses will be followed by more in-depth investigations of the samples taken from Upolu. These samples will be fed into a database that, in time, will make it possible to compare the reefs and to distinguish and understand their capacities to resist environmental upheavals.

Initiated by the Fondation Tara Expéditions and the Université Paris Sciences & Lettres, the Tara Pacific expedition (2016–2018) is supported by the CNRS, the CEA, the CSM, KAUST, and many other public and private partners including agnès b., Veolia, Fondation Albert 2, BillerudKorsnäs, and the Region of Brittany. 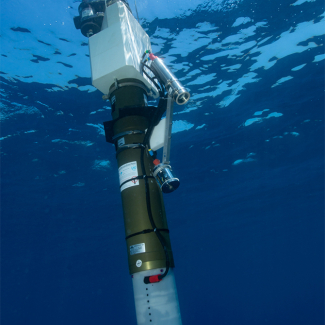