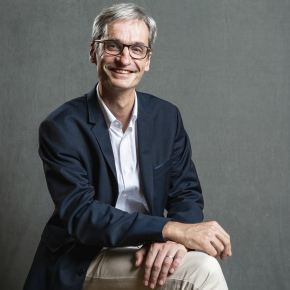 CNRS President Antoine Petit has appointed the physicist Thierry Dauxois as Director of the CNRS Institute of Physics effective 1 July 2021. He will succeed Astrid Lambrecht, who will assume other duties in Germany.

CNRS Senior Researcher Thierry Dauxois, who was born on 15 September 1967 in Toulouse, has devoted his research to nonlinear physics and statistical physics. He conducts his research at the Physics Laboratory (CNRS/ENS de Lyon), which he directed from 2012 to 2020. He then served as the Vice President for Research at l'ENS de Lyon from 2020 to 2021, before being appointed as the head of the CNRS Institute of Physics.

A former student of l’École normale supérieure de Lyon and the holder of a doctorate in physics, Thierry Dauxois was recruited by the CNRS in 1994. During his career, he completed long-term stays at the Los Alamos National Laboratory (United States), in Florence (Italy), and at the Scripps Institution of Oceanography in San Diego (United States). He was appointed a CNRS Senior Researcher in 2006, and from 2006 to 2010 directed the Phénix CNRS Research Network, which focuses on statistical physics and nonlinear physics. He then presided, from 2010 to 2012, over Section 02 of the National Committee for Scientific Research (Physics Theories: Methods, Models, and Applications).

His areas of expertise include nonlinear physics and statistical physics. He is a specialist of dynamical systems and chaos, along with the theoretical and more recently the experimental aspects of waves. Early in his career, his research focused on nonlinear waves, especially solitons, of which tsunamis are an example. He took an interest in their characterization, stability, and role in condensed matter, biophysics, and hydrodynamics. He more closely studied the link between statistical mechanics and nonlinear dynamics, especially the role of coherent structures in thermodynamics and dynamics. He then took a great interest in the statistical mechanics of systems with long range forces (gravitational systems, two-dimensional liquids, geophysics, plasma, etc.) by studying theoretical models, with special emphasis on a multidisciplinary approach.

His research activity has evolved over the last fifteen years, for in addition to conducting his theoretical work in statistical physics, he also became interested in the dynamics of density-stratified and/or rotating fluids (such as oceans), initially doing so analytically and later by way of experiments.

His research has led to over one hundred published scientific articles, and he has organized 18 international scientific symposia.

Safran teams up with the University of Limoges, CNRS and the National Research Agency to inaugurate the joint X-SELANS lab