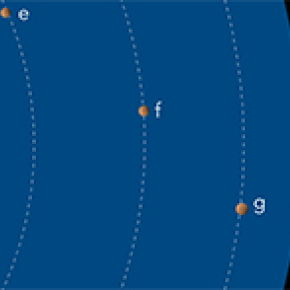 An exceptional system of exoplanets

Seven temperate Earth-sized planets revolve around the star TRAPPIST-1. In addition, at least three of them harbor conditions compatible with the presence of liquid water on their surfaces. The discovery was made by an international team led by a Belgian scientist and including researchers from the CNRS, the French Alternative Energies and Atomic Energy Commission (CEA) and the Université Pierre-et-Marie-Curie (UPMC), the Laboratoire d'Astrophysique de Bordeaux (CNRS/Université de Bordeaux), Laboratoire de Météorologie Dynamique (CNRS/UPMC/École polytechnique/ENS Paris) and Laboratoire Astrophysique, Instrumentation et Modélisation (CNRS/CEA/Université Paris Diderot). The planetary system around the star TRAPPIST-1 is one of the most astonishing and promising yet discovered, especially with regard to its scientific potential: as well as determining the orbits and masses of the planets, it will be possible in the near future to detect the potential presence of atmospheres. The findings are published in Nature on 23 February 2017.

In early 2016, high-precision brightness (“photometric”) monitoring carried out by ESO's TRAPPIST telescope and NASA's Spitzer Space Telescope discovered three Earth-sized planets (TRAPPIST-1 b, c and d) orbiting around the star TRAPPIST-1. Due to the orientation of the planetary system, the planets pass in front of the star during each orbit, causing a fall in brightness known as a transit. The amplitude of the transits is used to determine the radius of the planets, while their periodicity indicates their orbital distance and hence their insolation.

Following these initial findings, the star was systematically monitored to find out whether it contained any other planets. The result of this follow-up exceeded all expectations: TRAPPIST-1 has at least seven planets, all of which are Earth-sized (to within 15%). The six nearest planets (b to g) orbit their star in 1.5 to 12 days (the period of the seventh planet remains to be determined), and are 20 to 90 times closer to their star than the distance from the Earth to the Sun. At such distances, the tidal forces exerted by the star are considerable, locking the planets into synchronous rotation, which means that they rotate about their axis exactly once in one orbit, thus always showing the same face to their star (just as the Moon does relative to the Earth).

The planets of TRAPPIST-1 have insolations, and therefore average temperatures, similar to Earth's: the insolation of the innermost planet (b) is slightly higher than that of Mercury, while the outermost planets (g and h) have an insolation that is a little lower than that of Mars.
The insolations of at least three of the planets (e, f and g) are compatible with the existence of liquid water on their surface for a wide range of atmospheric compositions, as is shown by numerical simulations of their climate. Due to their synchronous rotation, it cannot be excluded that the planets with the highest irradiation (b, c and d) may harbor liquid water in temperate regions with little or no sunlight.

The TRAPPIST-1 planets are in orbital resonance: while planet g completes one orbit around its star, planets b, c, d, e and f complete 8, 5, 3, 2 and 4/3 orbits, respectively. This orbital architecture is thought to be a signpost of orbital migration, meaning that the planets were initially on more distant orbits but were brought closer to the star via interactions with their nascent disk of gas and dust. Because of gravitational pulling between planets, transits do not follow one another in a perfectly periodic manner but occur early or late, sometimes by more than one hour. This effect makes it possible to constrain the planets' masses, which have not yet been determined very precisely, and hence their densities. Current data appear to indicate that some of TRAPPIST-1's planets have low densities and are water-rich, a conclusion that will be refined with ongoing follow-up observations.

The planets around TRAPPIST-1 are in many ways reminiscent of the systems of moons around Jupiter and other gas giants in the Solar System, perhaps indicating similar mechanisms of formation. TRAPPIST-1's very small size (only 12 times Earth's radius, roughly the size of Jupiter) and its low luminosity (0.05% of the Sun's) provide exceptional conditions for observing its planets. Using NASA and ESA's future James Webb Space Telescope, due to be launched next year, it will be possible to detect any atmospheres they may harbor and characterize some of their properties. Together with Proxima b, discovered last August, the TRAPPIST-1 planets constitute the most promising targets so far discovered for the remote detection of possible signs of life outside the Solar System.