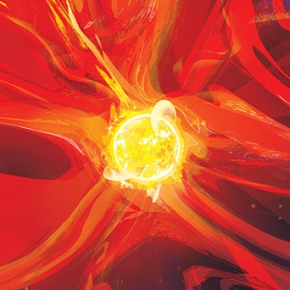 Exoplanets: SPIRou carries out first ever measurement of a very young planet’s density

A research team led by scientists from IRAP (CNRS/CNES/Université Toulouse III - Paul Sabatier) and IPAG (CNRS/UGA)1 has for the first time measured the internal density of a very young exoplanet orbiting a newly formed, extremely active star. Despite the ‘noise’ generated by the star’s activity, they successfully achieved this using the Canada-France-Hawaii Telescope (CFHT)'s planet hunting instrument SPIRou. The findings are published in MNRAS on 2 February 2021.

The star AU Microscopii (AU Mic) is no more than 22 million years old, in other words just a few months if a star’s lifespan were reduced to that of a human being.  It is therefore very young, just like the planetary system around it, which is home to a gas giant named AU Mic b.

The mass and density of AU Mic b, which was first detected by NASA’s TESS satellite, has now been determined using the SPIRou spectropolarimeter. They turn out to be very similar to those of Neptune, which is more than four billion years older.  However, the exoplanet’s orbit is 450 times nearer its star than Neptune is to the Sun.  Its atmosphere has a temperature of some 300°C, and it therefore belongs to the family of ‘hot Neptunes’.

Its star, which is highly active because it is so young, generates very strong magnetic fields, making it extremely difficult to analyse the AU Mic b signal. However, SPIRou’s high-performance capabilities, together with the work carried out by the scientists from IRAP and IPAG, finally made it possible to determine its mass, and hence its density, despite the ‘noise’ generated by AU Mic’s activity.

This is the first time that astronomers have successfully measured both the mass (using SPIRou) and radius (thanks to TESS) of an exoplanet less than 200 million years old.   It is also the first exoplanet whose mass has been measured by SPIRou, a next-generation instrument designed and built under the supervision of French teams and recently mounted on the Canada-France-Hawaii Telescope (CFHT).

In three other recently published papers1 , the research teams involved with SPIRou have also confirmed the unrivalled performance of the new instrument, and studied another characteristic of AU Mic b, the inclination of its orbit. This turned out to be well aligned with the equatorial plane of its star, suggesting that its formation was not affected by other massive objects.

All these findings provide additional information that will help scientists to refine models of planetary formation and migration.