The International Joint Unit (UMI) "Building Blocks for FUture ELectronics", or 2B-FUEL, was inaugurated on October 5, 2018 by Antoine Petit, Chairman and CEO of CNRS, and Professor Wonyong Lee, Vice-President of Research Affairs at Yonsei University.

Initiated by Professors Eunkyoung Kim (Yonsei University), Jeong Won Wu (Ewha Womans University) and André-Jean Attias (Sorbonne University), the UMI carries out research on functional materials for optics and electronics as well as systems. The project aims to develop the basic building blocks of tomorrow's electronics, which could lead to novel 3D printable organic electronics systems whose properties will be tested by researchers in the UMI. The interest of such an approach in South Korea is obvious, given the presence there of key industrial players in the field.

In France, the UMI has a 'mirror' lab, the Institut Parisien de Chimie Moléculaire (CNRS/Sorbonne Université), in Paris, where Attias works.

Cooperation between France and South Korea on these research topics is a long-standing tradition. After several years of cooperation, most of the founding members of the 2BFuel UMI had already set up in 2010 an International Research Network (GDRI) on materials for optics and electronics, dubbed FUN MOOD. The GDRI has organised international workshops and co-organised winter schools and student exchanges, and has led to some thirty joint publications. Two years earlier, France and South Korea had already established the CNRS-Ewha Research Centre (CERC) on the campus of Ewha Womans University in Seoul. A recent partnership between FUN MOOD and CERC led to the development at Ewha Womans University of systems and research into ultrafast dynamics using a pump-probe technique. The vitality of this collaboration and the quality of its work have demonstrated its value and the need to consolidate it within an International Joint Unit, reinforced by the addition of new partners. 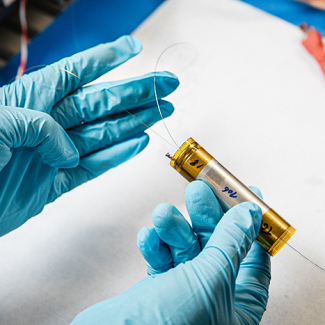