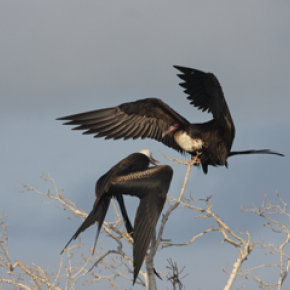 Frigate birds were already known for their ability to fly continuously for weeks without landing. A telemetric study of their trajectory and flight strategy has just revealed that they can remain airborne for over two months during their transoceanic migrations. These astute strategists take advantage of atmospheric conditions encountered in tropical waters (trade winds and cloud updraft) to fly and glide over thousands of kilometers by minimizing the beating of their wings and thus their energy use. The results of this study, led by Henri Weimerskirch of the Centre d'études biologiques de Chizé (CNRS/Université de La Rochelle) in partnership with colleagues based in La Réunion, the United Kingdom, Canada, and Germany1 , were published on July 1, 2016 in the journal Science.

A sea bird that is difficult to observe, which makes it somewhat of an enigma, the frigate bird (Fregata minor) is extremely light and equipped with very long and wide wings that give it an extraordinary ability to glide and climb in updrafts without beating its wings. With the longest period of parental care of all birds, and its inability to land on water2  (even while depending entirely on flying fish that it must capture in flight), the frigate bird is a subject of choice for the Early life3   research project focusing on the behavior of young marine predators. A team of researchers thus conducted a major program to tag frigate birds on Europa Island in the Mozambique Channel, a breeding ground for the species. Approximately fifty adult and juvenile specimens were equipped with autonomous sensors that can simultaneously measure, over several months, the GPS position, cardiac frequency, and wingbeats of frigate birds. This data makes it possible to break down the bird's flight, and determine whether it is beating its wings or gliding, and therefore deduce its movement and energy expenditure.

On a large scale, the recordings show that frigate birds make their transoceanic flights between Africa and Indonesia by following the edge of the tropical cyclone formation area near the Equator, often called the doldrums4  by sailors. They use favorable winds (trade winds) to effortlessly make immense circles in the Indian Ocean. The juveniles in particular, who leave their birthplace for the first time, travel thousands of kilometers and, even more surprisingly, can remain airborne for over two months without touching ground.

On a smaller scale, within these circular trajectories, the studies reveal that frigate birds follow a roller-coaster flight pattern. Using the convection under cumulus clouds, they gain altitude by gliding without beating their wings, and with very little energy expenditure. The recordings then show short periods of total inactivity, suggesting that frigate birds potentially sleep for a few minutes during this ascent phase. Once they have reached the bottom of a cumulus cloud, at an altitude of 600 or 700 meters, they glide down over kilometers without expending energy. In order to glide over longer distances in less cloudy areas, frigate birds regularly climb to very high altitudes (of 3,000 to 4,000 meters) by flying inside cumulus clouds, where they can take advantage of strong updrafts. However, they also encounter negative temperatures there, for which their plumage devoid of down is not adapted.

This study raises numerous questions regarding the capacity of frigate birds to sleep in flight and resist the extreme conditions encountered within cumulus clouds, as well as the strategy they use to avoid tropical cyclones in their path.

A video on this research can be viewed
(when using this video, please indicate that it is an excerpt from Independence days, sur les traces des jeunes prédateurs marins, a film by Aurélien Prudor and Henri Weimerskirch).