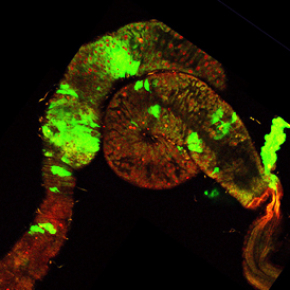 What if social behavior affected the progression of even noncontagious diseases?  This is precisely what has been demonstrated by French CNRS teams,1 with support from the French National Research Institute for Sustainable Development (IRD), Paris-Sud University, the University of Montpellier, the French Alternative Energies and Atomic Energy Commission (CEA), and colleagues from Spain and Australia. Using a fly model of intestinal cancer, the researchers have shown that disease progression is impacted both by social isolation—which has a negative effect—and the composition of the social group with which individuals associate. Their findings are published in Nature Communications (September 3, 2018).

For many animals, humans included, social behavior can play a critical role in the survival of individuals. The effect that interactions between individuals can have on the spread of communicable diseases is well known. But is there any connection between social interactions and the progression, within sick individuals, of noncommunicable diseases like cancers? To address this question, the scientists chose the fruit fly Drosophila melanogaster as their research model. Control of the social environment and experimental induction of disease (an intestinal cancer in this case) are both easily achieved when working with drosophilas. The team sought to determine whether the social environment of diseased individuals altered the speed of tumor progression and if these flies could choose their social environment to slow this progression.

They observed that disease progression in sick flies was faster in social isolation than when interacting with other flies. Even more surprisingly, the very structure of a diseased fly’s social group could affect the progression of its illness. When a sick fly is in the company of healthy ones, its tumor spreads more quickly than when interacting with other sick individuals. Detailed analyses of interactions between flies, monitored through video, suggest that sick flies interact less with healthy ones in their presence—effectively exhibiting a sort of isolation in the midst of the healthy crowd.

It is interesting to note that, when given the choice between a sick or healthy group, a sick fly will choose to join other sick flies—at least during the early stages of illness. Once the tumor is in an advanced state, the fly no longer shows any preference. The behavior of healthy flies is different. Though they make no distinction between healthy flies and sick flies at an early stage of disease, they will avoid sick flies with more advanced tumors and prefer the company of other healthy flies. The exact reasons for such avoidance are still poorly understood and currently under study. It may reflect a nonspecific response to the risks posed by diseases in general—such as contagion, compromised reproductive potential, and greater vulnerability to predators.

Though these findings cannot yet be extrapolated to humans, they suggest that social environment plays a substantial, even major, role in the development of a disease like cancer.