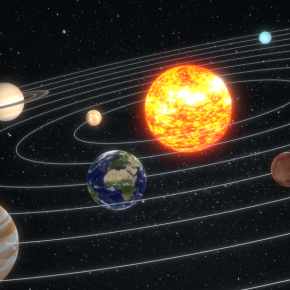 When geology reveals the Solar System’s past secrets

Because the Solar System is chaotic, astronomers have believed until now that they could not calculate the position and orbit of the planets over 60 million years ago. An international team has just broken this barrier, showing how an analysis of geological data can show the state of the Solar System 200 million years ago. This study, which a CNRS astronomer from the Institut de Mécanique Céleste et de Calcul des Ephémérides (Observatoire de Paris - PSL/CNRS/Sorbonne Université/Université de Lille) participated in, was published in the Proceedings of the National Academy of Sciences on March 4, 2019.

Contrary to what we imagine, the planets do not rotate around the sun on fixed orbits, set precisely as if on a mechanical model solar system. The objects in our Solar System influence the movement of all the others, as if they were connected by springs: a small disturbance at one point of the system has repercussions on all the planets, which will tend to later return to their initial position. Planets’ orbits are governed by slow rotation around the sun and oscillate around their mean value (See this video made in 1993).

Since 1989, thanks to the work of Jacques Laskar, astronomers have known that these oscillations are irregular, or chaotic, and that calculations about them cannot give us information to understand the state of the Solar System prior to 60 million years (Ma) ago. Uncertainties due to the Solar System’s chaotic nature are multiplied by a factor of 10 for every 10 Ma. Now this limit has been raised after the work of a multidisciplinary international team that Jacques Laskar, a CNRS astronomer1 from the Institut de Mécanique Céleste et de Calcul des Ephémérides (Observatoire de Paris - PSL/CNRS/Sorbonne Université/Université de Lille) participated in. The French astronomer and his geologist colleagues have shown how geological data can push the horizons for predictability in the Solar System up to 200 Ma.

But why? What can geology tell us about astronomy? Milankovitch’s famous parameters tell us that some past climate change is due to variations in insulation on Earth’s surface resulting from changes in its orbit. These past climate changes have left traces on Earth in geological strata. From observations made on these strata, we can determine parameters about Earth's orbit, and deduce the same for other planets.

The researchers have been able to extract quantitative data on the Solar System’s past from two important cores taken from North American geological layers. Their results show for example that 200 Ma ago the Earth’s eccentricity cycle oscillated with a period of 1.7 Ma versus 2.4 Ma today. This is also geological proof that the Solar System is chaotic: if it were regular, we would see the same period as we do now.

The research team now hopes to refine these results by studying other high-latitude geological deposits that would give extra information on variations in the orientation of planetary orbits.