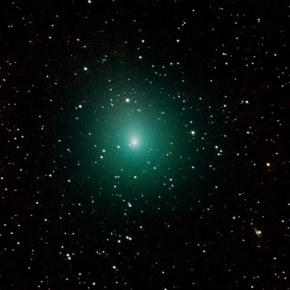 Where did the Earth’s water come from? Although comets, with their icy nuclei, seem like ideal candidates, analyses have so far shown that their water differs from that in our oceans.  Now, however, an international team, bringing together CNRS researchers at the Laboratory for Studies of Radiation and Matter in Astrophysics and Atmospheres (Paris Observatory - PSL/CNRS/ Sorbonne University/University of Cergy-Pontoise) and the Laboratory of Space Studies and Instrumentation in Astrophysics (Paris Observatory - PSL/CNRS/Sorbonne University/University of Paris), has found that one family of comets, the hyperactive comets, contains water similar to terrestrial water.  The study, published in the journal Astronomy & Astrophysics on May 20, 2019, is based in particular on measurements of comet 46P/Wirtanen carried out by SOFIA, NASA's Stratospheric Observatory for Infrared Astronomy.

According to the standard theory, the Earth is thought to have formed from the collision of small celestial bodies known as planetesimals.  Since such bodies were poor in water, Earth’s water must have been delivered either by a larger planetesimal or by a shower of smaller objects such as asteroids or comets.

To trace the source of terrestrial water, researchers study isotopic ratios1, and in particular the ratio in water of deuterium to hydrogen, known as the D/H ratio (deuterium is a heavier form of hydrogen). As a comet approaches the Sun, its ice sublimes2, forming an atmosphere of water vapour that can be analysed remotely. However, the D/H ratios of comets measured so far have generally been twice to three times that of ocean water, which implies that comets only delivered around 10% of the Earth’s water.

When comet 46P/Wirtanen approached the Earth in December 2018 it was analysed using the SOFIA airborne observatory, carried aboard a Boeing aircraft. This was the third comet found to exhibit the same D/H ratio as terrestrial water. Like the two previous comets, it belongs to the category of hyperactive comets which, as they approach the Sun, release more water than the surface area of their nucleus should allow. The excess is produced by ice-rich particles present in their atmosphere.

Intrigued, the researchers determined the active fraction (i.e. the fraction of the nucleus surface area required to produce the amount of water present in their atmosphere) of all comets with a known D/H ratio. They found that there was an inverse correlation between the active fraction and the D/H ratio of the water vapour: the more a comet tends towards hyperactivity (i.e. an active fraction exceeding 1), the more its D/H ratio decreases and approaches that of the Earth.

Hyperactive comets, whose water vapour is partially derived from icy grains expelled into their atmosphere, thus have a D/H ratio similar to that of terrestrial water, unlike comets whose gas halo is produced only by surface ice.  The researchers suggest that the D/H ratios measured in the atmosphere of the latter are not necessarily indicative of the ice present in their nucleus.  If this hypothesis is correct, the water in all cometary nuclei may in fact be very similar to terrestrial water, reopening the debate on the origin of Earth’s oceans.

Exoplanets: SPIRou carries out first ever measurement of a very young planet’s density