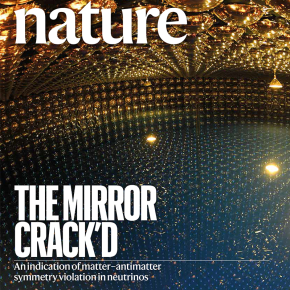 We live in a world of matter – because matter overtook antimatter, though they were both created in equal amounts by the Big Bang when our universe began. As featured on the cover of Nature on 16 April 2020, neutrinos and the associated antimatter particles, antineutrinos, are reported to have a high likelihood of differing behaviour that offers a promising path to explaining the asymmetry between matter and antimatter. These observations may explain this mysterious antimatter disappearance. They come from the T2K experiment conducted in Japan and in which three French laboratories are involved, affiliated with the CNRS, École Polytechnique - Institut Polytechnique de Paris, Sorbonne Université and the CEA.

For decades, scientists have detected symmetry violations between quarks (components of atoms) and their antiparticles. However, this violation is not large enough to explain the disappearance of antimatter in the universe. Another path looks promising: asymmetry between the behaviour of neutrinos and antineutrinos could fill in a large part of the missing answer. This is what the T2K2 experiment is researching. It is located in Japan; its French collaborators are the Leprince-Ringuet Laboratory (CNRS/École Polytechnique – Institut Polytechnique de Paris), the Laboratoire de Physique Nucléaire and des Hautes Energies (CNRS/Sorbonne Université) and the CEA's Institut de Recherche sur les Lois Fondamentales de l'Univers.

Neutrinos are extremely light elementary particles. They pass through materials, are very difficult to detect, and are even harder to study precisely. Three kinds of neutrinos – or flavours – exist: the electron, muon and tau neutrinos. The behaviour that could differ for neutrinos and antineutrinos is oscillation, the capacity of these particles to change flavour as they propagate3. The T2K experiment uses alternating beams of muon neutrinos and muon antineutrinos, produced by a particle accelerator at the J-PARC research centre, on Japan’s east coast. Towards its west coast, a small fraction of the neutrino (or antineutrino) beams sent by J-PARC are detected using the light pattern that they leave in the 50,000 tonnes of water in the Super-Kamiokande detector, set up 1,000 metres deep in a former mine. During their 295 km journey through rock (taking a fraction of a second at the speed of light), some of the muon neutrinos (or antineutrinos) oscillated and took on another flavour, becoming electron neutrinos.

By counting the number of particles that reached Super-Kamiokande with a different flavour than the one they were produced with at J-PARC, the T2K collaboration has shown that neutrinos seem to oscillate more often than antineutrinos. The data even point to almost maximum asymmetry (See graph below) between how neutrinos and antineutrinos behave.

These results, the fruit of ten years of data accumulated in the Super-Kamiokande with a total of 90 electronic neutrinos and 15 electronic antineutrinos detected, are not yet statistically large enough to qualify this as a discovery; however it is a strong indication and an important step. The T2K experiment will now continue with higher sensitivity. A new generation of experiments should multiply data production in the coming years: Hyper-K, the successor to the Super-Kamiokande in Japan, whose construction has just been started, and Dune, being built in the USA, ought to be operational around 2027-2028. If their new data confirm the preliminary results from T2K, ten years from now neutrinos could provide the answer to why antimatter disappeared in our universe.

The T2K experiment was constructed and is operated by an international collaboration of about 500 scientists from 68 institutions in 12 countries (Canada, France, Germany, Italy, Japan, Poland, Russia, Spain, Switzerland, UK, USA and Vietnam). This result is made possible by the efforts of J-PARC to deliver high-quality beam to T2K.
The French laboratories have had major involvement in the construction and use of near detectors (which characterize the beam before the neutrinos have had time to change flavour) and in ancillary experiments conducted at CERN for better understanding the beam. They are very involved in the global analysis of data and are now engaged in the vast program of improvement for near detectors.
The T2K experiment is supported by the Japanese Ministry for Culture, Sports, Science, and Technology (MEXT), and is jointly hosted by the High Energy Accelerator Research Organization (KEK) and the University of Tokyo’s Institute for Cosmic Ray Research (ICRR). 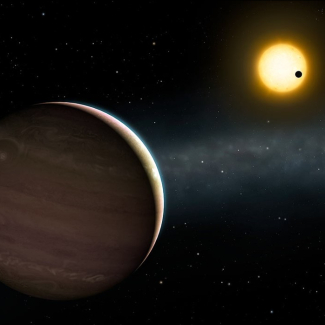