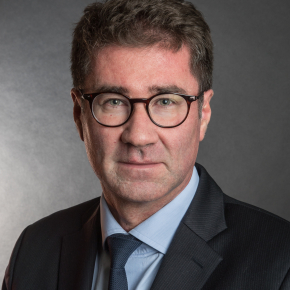 Jean-Luc Moullet has been appointed CNRS Chief Technology Transfer Officer by CNRS President and CEO Antoine Petit, effective 18 March 2019. Moullet’s role is to steer and coordinate all CNRS activities in the areas of innovation, value creation, and technology transfer. Until now, he served as industry programme director at the French investment secretariat, working under the prime minister. He will be replacing Michel Mortier, who will now monitor the creation of the CNRS Foundation, which he is to direct.

As Chief Technology Transfer Officer, Jean-Luc Moullet will now sit on the CNRS management board. He will be in charge of steering and coordinating all CNRS value creation and technology transfer activities. Boasting a portfolio of 5,600+ patent families, 1,200+ active licenses, 21 framework agreements with CAC 40 companies, 1,400+ start-ups, and 140+ public-private research programmes, the CNRS is among the top ten most innovative public institutions, according to Clarivate rankings.

Jean-Luc Moullet, 50, is an alumnus of the École Polytechnique and the École Nationale Supérieure des Mines de Paris. He holds the title of Ingénieur des Mines. His career, which began in 1993, has led him to hold positions in public administration and private companies. He started out as industrial affairs adviser to the prefect of the French region of Centre, before joining the Service des Participations de la Direction du Trésor—the government agency responsible for management of state holdings—where he worked from 1997 to 1999.

Moullet then spent nearly 10 years at Thomson Technicolor, initially to establish tech partnerships with Silicon Valley start-ups (San Francisco, 1999–2001), and later to deploy new technological services for film post-production (Los Angeles, 2001–2004). In 2004, he became Director of Software and Technology Solutions for Thomson Technicolor in Paris, where he stayed until his 2009 appointment as chairman of Sephira, in Le Mans. In 2010, Moullet returned to the public sector to take on the role of industrial affairs adviser to the French defence minister.

From 2012 on, he served as industry programme director for the French investment secretariat, reporting to the prime minister. In that role, he managed a €13-billion portfolio for the government’s Investissements d’Avenir R&D investment programme.