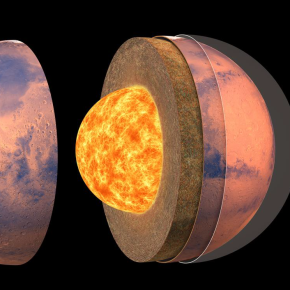 Using information obtained from around a dozen earthquakes detected on Mars by the Very Broad Band SEIS seismometer, developed in France, the international team of NASA's InSight mission has unveiled the internal structure of Mars. The three papers published on July 23, 2021 in the journal Science, involving numerous co-authors from French institutions and laboratories, including the CNRS, the Institut de Physique du Globe de Paris, and Université de Paris, and supported in particular by the French space agency CNES and the French National Research Agency ANR, provide, for the first time, an estimate of the size of the planet's core, the thickness of its crust and the structure of its mantle, based on the analysis of seismic waves reflected and modified by interfaces in its interior. It makes this the first ever seismic exploration of the internal structure of a terrestrial planet other than Earth, and an important step towards understanding the formation and thermal evolution of Mars.

Before NASA's InSight mission, the internal structure of Mars was still poorly understood. Models were based only on data collected by orbiting satellites and on the analysis of Martian meteorites that fell to Earth. On the basis of gravity and topographical data alone, the thickness of the crust was estimated to be between 30 and 100 km. Values of the planet's moment of inertia and density suggested a core with a radius of 1 400 to 2 000 km. The detailed internal structure of Mars and the depth of the boundaries between the crust, mantle and core were, however, completely unknown.

With the successful deployment of the SEIS experiment on the surface of Mars in early 2019, the mission scientists, including the 18 French co-authors involved and affiliated to a wide range of French institutions and laboratories1 , together with their colleagues from ETH in Zurich, the University of Cologne and the Jet Propulsion Laboratory in Pasadena, collected and analysed seismic data over one Martian year (almost two Earth years).

It should be pointed out that to simultaneously determine a structural model, the (arrival) time of an earthquake, and its distance, more than one station is usually required.  However, on Mars the scientists only have one station, InSight. It was therefore necessary to search the seismic records for the characteristic features of waves that had interacted in various ways with the internal structures of Mars, and identify and validate them. These new measurements, coupled with mineralogical and thermal modelling of the planet's internal structure, have made it possible to overcome the limitation of having a single station. This method ushers in a new era for planetary seismology.

Another difficulty on Mars is its low seismicity and the seismic noise generated by its atmosphere. On Earth, earthquakes are much stronger, while seismometers are more effectively located in vaults or underground, making it possible to obtain an accurate image of the planet's interior. As a result, special attention had to be paid to the data. "But although Martian earthquakes have a relatively low magnitude, less than 3.5, the very high sensitivity of the VBB sensor combined with the very low noise at nightfall enabled us to make discoveries that, two years ago, we thought were only possible with earthquakes with a magnitude greater than 4,” explains Philippe Lognonné, a Professor at the University of Paris and the Principal Investigator for the SEIS instrument at IPGP.

Every day, the data, processed by CNES, IPGP and CNRS, and transferred to the scientists, was carefully cleaned of ambient noise (wind and deformation related to rapid temperature changes).  The international Mars Quake Service team (MQS) recorded the seismic events on a daily basis: more than 600 have now been catalogued, of which over 60 were caused by relatively distant earthquakes.
Around ten of the latter contain information about the planet's deep structure: “The direct seismic waves from an earthquake are a bit like the sound of our voices in the mountains: they produce echoes. And it was these echoes, reflected off the core, or at the crust-mantle interface or even the surface of Mars, that we looked for in the signals, thanks to their similarity to the direct waves,” Lognonné explains.

An altered crust, a mantle revealed, and a large liquid core

By comparing the behaviour of seismic waves as they travelled through the crust before reaching the InSight station, several discontinuities in the crust were identified: the first, observed at a depth of about 10 km, marks the boundary between a highly altered structure, resulting from circulation of fluid a very long time ago, and crust that is only slightly altered.  A second discontinuity around 20 km down, and a third, less pronounced one at around 35 km, shed light on the stratification of the crust beneath InSight: "To identify these discontinuities, we used all the most recent analytical methods, both with earthquakes of tectonic origin and with vibrations caused by the environment (seismic noise)," says Benoit Tauzin, Senior Lecturer at the University of Lyon and a researcher at LGL-TPE.

In the mantle, the scientists analysed the differences between the travel time of the waves produced directly during the earthquake, and that of the waves generated when these direct waves were reflected off the surface. These differences made it possible, using only a single station, to determine the structure of the upper mantle, and in particular the variation in seismic velocities with depth. However, such variations in velocity are related to temperature. "That means we can estimate the heat flow of Mars, which is probably three to five times lower than the Earth's, and place constraints on the composition of the Martian crust, which is thought to contain over half the heat-producing radioactive elements present in the planet,” adds Henri Samuel, a CNRS researcher at IPGP.

Finally, in the third study, the scientists looked for waves reflected off the surface of the Martian core, the measurement of whose radius was one of the main achievements of the InSight mission. "To do this," explains Mélanie Drilleau, a research engineer at ISAE-SUPAERO, "we tested several thousand mantle and core models against the phases and signals observed." Despite the low amplitudes of the signals associated with the reflected waves (known as ScS waves), an excess of energy was observed for cores with a radius between 1 790 km and 1 870 km. Such a large size implies the presence of light elements in the liquid core and has major consequences for the mineralogy of the mantle at the mantle / core interface.

More than two years of seismic monitoring has resulted in the very first model of the internal structure of Mars, right down to the core. Mars thus joins the Earth and the Moon in the select club of terrestrial planets and moons whose deep structures have been explored by seismologists. And, as often happens in planetary exploration, fresh questions emerge: is the alteration of the top 10 km of crust general, or is it limited to the InSight landing zone? What impact will these first models have on theories of the formation and thermal evolution of Mars, in particular for the first 500 million years when Mars had liquid water on its surface and intense volcanic activity?

With the two-year extension of the InSight mission and the additional electrical power obtained following the successful cleaning of its solar panels carried out by JPL, new data should consolidate and further improve these models.

About InSight and SEIS:

JPL manages the InSight mission on behalf of the NASA Science Mission Directorate. InSight is part of the NASA Discovery programme, operated by the Marshall Space Flight Center (MSFC), a NASA facility in Huntsville, Alabama. Lockheed Martin Space in Denver built the InSight spacecraft, including its cruise stage and lander, and supports spacecraft operations for the mission. CNES is the prime contractor for SEIS, and the Institut de Physique du Globe de Paris (Université de Paris / IPGP / CNRS) assumes scientific responsibility for it. CNES funds French contributions, coordinates the international consortium (*) and was responsible for the integration, testing and supply of the complete instrument to NASA. The IPGP designed the VBB (Very Broad Band) sensors, tested them before their delivery to CNES and contributes to the operation of the VBBs on Mars.

SEIS and APSS operations are carried out by CNES within FOCSE-SISMOC, with the support of the Centro de Astrobiología (Spain). The SEIS data is formatted and distributed by the Mars SEIS Data Service of IPG Paris, as part of the InSight National Observation Service to which the LPG also contributes, as well as GéoAzur for 'Sismo at School' activities.  The daily identification of earthquakes is carried out by InSight's Mars Quake Service, a collaborative operational service led by ETH Zurich, to which seismologists from IPG Paris, the University of Bristol (UK) and Imperial College London (UK) also contribute.

(*) in collaboration with SODERN for the development of the VBBs, JPL, the Swiss Federal Institute of Technology (ETH, Zürich Switzerland), the Max Planck Institute for Solar System Research (MPS, Göttingen, Germany), Imperial College London and the University of Oxford provided the subsystems of SEIS and are involved in the scientific operation of SEIS.