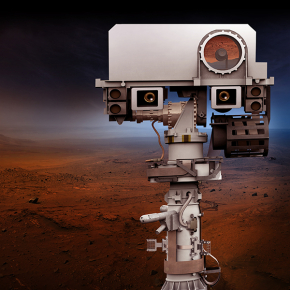 Thursday 18 February, the Perseverance rover, carrying a suite of seven instruments including the French SuperCam, a greatly enhanced version of the ChemCam instrument already operating on NASA’s Curiosity Mars rover since August 2012, set down in Jezero Crater, an impact basin 45 kilometres across, home to an ancient river delta that flowed 3½ billion years ago into a lake. This Mars landing was followed live from the Salle de l’Espace at CNES headquarters in Paris Les Halles, in strict accordance with COVID-19 safety protocols, by President Emmanuel Macron, Bruno Le Maire, Minister of the Economy, Finance and the Recovery, Frédérique Vidal, Minister for Higher Education, Research and Innovation, CNES President Jean-Yves Le Gall and CNRS Chairman & CEO Antoine Petit. It also offered the opportunity for a video link-up between the French President and Thomas Pesquet, who is currently readying for his second spaceflight to the International Space Station (ISS) this spring.

Sent aloft on 30 July 2020 atop an Atlas V launcher from Cape Canaveral, Florida, Perseverance, NASA’s latest rover, will explore this ancient region of Mars to reveal its geologic history, determine whether it was once habitable and look for signs of life. Besides exploring in situ, the rover is designed to collect and cache samples for later retrieval and return to Earth by two joint U.S-European Mars Sample Return (MSR) missions within the next 10 years. Its mission is also to pave the way for future human exploration of the red planet.

SuperCam is the mission science team’s very own ‘Swiss Army knife’, capable of performing five different types of analysis: measurement of elemental chemical composition, two kinds of molecular measurements (bonding and arrangement of atoms within minerals), an imager to acquire pictures of targets analysed and the first ever science microphone to be operated on the surface of Mars. It will remotely survey the chemistry and mineralogy of Mars, as well as the composition of its atmosphere.

The Mars 2020 mission was developed by NASA’s Jet Propulsion Laboratory (JPL/Caltech). SuperCam was developed jointly by the Los Alamos National Laboratory (LANL) and a consortium of French research laboratories with a contribution from the University of Valladolid, Spain. CNES has overall responsibility for the French contribution to SuperCam, built in partnership with the French national scientific research centre CNRS and universities and engineering schools. The instrument will be operated alternately from LANL and the Mars 2020 French Operations Centre for Science and Exploration (FOCSE) at CNES’s field centre in Toulouse.

After this evening’s extraordinary event, CNES President Jean-Yves Le Gall commented: “Perseverance’s landing on Mars marks a historic milestone in studying the red planet. At CNES, we are extremely proud that NASA has renewed its faith in French scientific expertise, thus confirming the strength of our partnership with the scientific community, industry, NASA and JPL, with whom we have an exceptional relationship. The Mars 2020 mission is the first phase in the Mars Sample Return (MSR) programme led by NASA, with a major contribution from ESA which is supplying the Earth Return Orbiter (ERO) that will bring back samples in the early 2030s. The adventure is only just beginning!”

CNRS Chairman & CEO Antoine Petit added: “We’ve made it to Mars! Thank you to NASA and CNES for enabling us to deploy our roving ‘laboratories’ in Jezero Crater. Make no mistake; this is a scientific and technological first that will go down in history. I would like to congratulate the women and men who made this project a reality, particularly the engineers and research scientists working in laboratories at CNRS and its partners, to whom we owe this success. The science teams will now be eagerly relaying one another to conduct an unprecedented exploration of the red planet, the first step before the planned return of samples in the 2030s. Perseverance is first and foremost a great international human adventure like only science and the quest for knowledge can give us.” 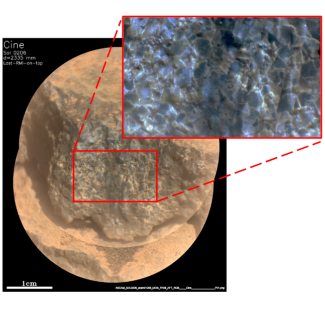