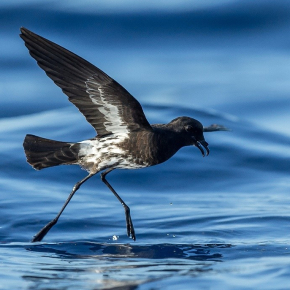 A new seabird scarcely bigger than a swallow and endemic to New Caledonia is described in the Bulletin of the British Ornithologists’ Club (11 March 2022) by a team including CNRS and INRAE scientists from the Chizé Centre for Biological Studies (CNRS / La Rochelle University). The discovery is all the more remarkable because the New Caledonian storm petrel, sighted since 2008, is represented by three ‘forgotten’ museum specimens. It is believed that, with an estimated population of 100 to 1,000 pairs, the species is already endangered.

There are currently a little over 10,000 known species of birds on the planet and, on average, one to five new ones are discovered annually. Among the 430 species of seabirds, a third are petrels, close cousins of the albatross. Because petrels are nocturnal, discreet, and primarily nest on secluded islands, we still know little about many of them.

An unknown bird of the storm petrel family had been spotted off of Nouméa, New Caledonia, as early as 2008: its streaked underside distinguished it from other birds in this group that have white bellies. Regular sightings of birds of the same appearance in the Coral Sea (east of Australia), beginning in 2010, attracted the attention of specialists.

Other seemingly unconnected clues had also long intrigued ornithologists. In particular, five museum specimens of petrels with streaked bellies, collected at least a century ago during Pacific expeditions and kept in various museums throughout the world, had been erroneously assigned to three different species. Recently, three of these museum specimens were formally identified as the New Zealand storm petrel (Fregetta maoriana), a bird previously thought extinct but rediscovered in 2003. Indeed, this is the species ornithologists initially thought that they had spotted off Nouméa in 2008.

Through painstaking study of the birds’ morphology and genetics, as well as of museum archives and birds at sea, the petrels seen south of Nouméa and in the Coral Sea have now been positively identified as members of a ‘new’ species—dubbed the New Caledonian storm petrel (Fregetta lineata)—along with two of the five mysterious old museum specimens (one collected from the Marquesas Islands in 1922; the other from Samoa in 1839) and a third, more recent specimen collected in 1973, on an island off Brisbane, Australia.

The authors of the study provide proof that F. lineata breeds in New Caledonia: a photograph taken in September 2014 showing a chick from the island still partially covered in down. Specimen collection dates strongly suggest that the Marquesas Islands and Samoa are in its non-breeding range.

So, where exactly in New Caledonia do the storm petrels breed? All the islets in the southern lagoon of New Caledonia have been visited and carefully searched, and researchers have spent many nights on most of them; yet no storm petrel has been seen or heard. The new species might breed on islets in the unexplored Bouloupari Lagoon—or inland, possibly in the Tontouta River valley, which is the breeding territory of another species of petrel. Based on the number of individuals sighted at sea, the total population may be in the order of 100 to 1,000 pairs, and now critically endangered. Thus, it is urgent that the breeding grounds of F. lineata be found, to immediately take action for its protection.