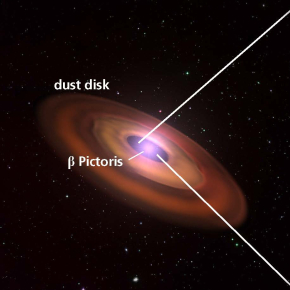 CNRS researchers at the Observatoire de Paris – PSL, Université Grenoble Alpes, Aix-Marseille Université, Université de Paris, and Université de Lille, together with their international partners, have for the first time detected the light emitted by the exoplanet   Pictoris c, initially discovered thanks to the tiny variations in the velocity of the star β Pictoris that it causes. A very accurate estimate of its position was used to point the GRAVITY interferometer at the exoplanet, simultaneously using four ground-based telescopes in Chile, and thus observe it directly. The findings are published in two articles in the journal Astronomy & Astrophysics on 2 October 2020.

Since August 2019, we have known about the existence, orbital period and even the mass of β Pictoris c, but until now we had been unable to see it. The exoplanet was discovered following more than 10 years of observations of the star β Pictoris, using an indirect method called the radial velocity technique: tiny movements of the star show that a giant planet with a mass nine times that of Jupiter orbits very near it, at a distance of only 2.7 astronomical units1 . In fact, the planet is so close that it was impossible to observe it directly, since conventional telescopes are unable to detect it in the glare of its star.

However by using the GRAVITY interferometer, whose resolution is 100 times greater than that of conventional telescopes, the international research team2 was for the first time able to detect the light emitted by β Pictoris c. This feat would not have been possible without very accurate calculations of the exoplanet’s position around its star. The problem is that, although GRAVITY is extremely sensitive, its field of view is very limited. It was therefore necessary to obtain a very accurate estimate of β Pictoris c’s position in order to point the telescopes at the right spot.

This is the first time that a direct observation of an exoplanet has been based on data provided by the radial velocity method.

The scientists were thus able to combine the information provided by the two methods: one gives the mass, while the other gives the luminosity. These data are crucial, because the exact relationship between the mass and luminosity of planets is connected to the mechanisms of their formation. This enabled the research team to confirm that the young planet β Pictoris c is cooling down and still losing part of the heat accumulated during its formation.

These findings obtained about a young planet should enable us to better understand how giant planets form. The scientists also hope to be able to answer a fresh question raised by their study: why is β Pictoris c six times less luminous than its sister planet β Pictoris b, despite the fact that their masses are very similar?