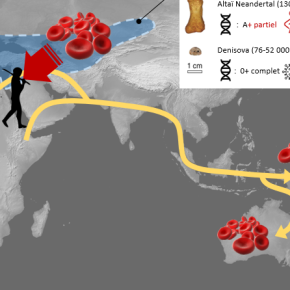 The extinct hominin lineages of the Neandertals and Denisovans were present throughout Eurasia from 300,000 to 40,000 years ago. Despite prior sequencing of about 15 Neandertal and Denisovan individuals, the study of the genes underlying blood groups had hitherto been neglected. Yet blood group systems were the first markers used by anthropologists to reconstruct the origins of hominin populations, their migrations, and their interbreeding.

In a new study, scientists from the CNRS, Aix-Marseille University, and the French Blood Establishment (EFS) have examined the previously sequenced genomes of one Denisovan and three Neandertal females who lived 100,000 to 40,000 years ago, in order to identify their blood groups and consider what they may reveal about human’s evolutionary history. Of the 40-some known blood group systems, the team concentrated on the seven usually considered for blood transfusion purposes, the most common of which are the ABO (determining the A, B, AB, and O blood types) and Rh systems.

The findings bolster previous hypotheses but also offer new surprises. While it was long thought that Neandertals were all type O—just as chimpanzees are all type A and gorillas all type B—the researchers demonstrated that these ancient hominins already displayed the full range of ABO variability observed in modern humans. Extensive analysis covering other blood group systems turned up alleles that argue in favour of African origins for Neandertals and Denisovans.

Especially surprising is the discovery that the Neandertals harboured a unique Rh allele absent in modern humans—with the notable exceptions of one Aboriginal Australian and one Papuan. Do these two individuals bear testimony to interbreeding of Neandertals and modern humans before the migration of the latter into Southeast Asia?

Finally, this study sheds light on Neandertal demographics. It confirms that these ancient hominins exhibited very little genetic diversity, and that they may have been susceptible to haemolytic disease of the fetus and newborn (erythroblastosis fetalis)—due to maternofetal Rh incompatibility—in cases where Neandertal mothers were carrying the children of Homo sapiens or Denisovan mates. These clues strengthen the hypothesis that low genetic diversity together with low reproductive success contributed to the disappearance of Neandertals. 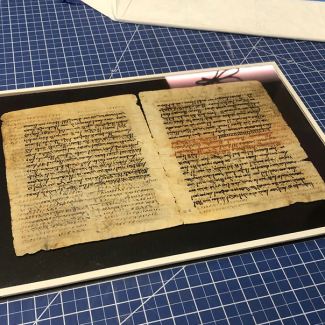