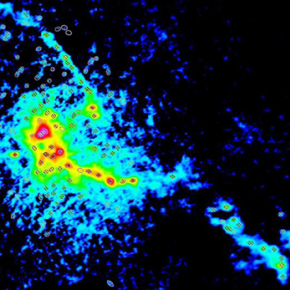 The laws of star formation challenged

Universe
-A +A
Partager ce contenu

An international team led by researchers at CNRS, Université Grenoble Alpes and the French Alternative Energies and Atomic Energy Commission (CEA) has challenged currently held ideas about star formation. The unprecedented resolution of the observations obtained using the Atacama Large Millimetre/Submillimetre Array (ALMA) enabled them to measure the quantity of high-mass star-forming cores in a remote, very active region of our Galaxy, and show that there is a higher proportion of them there than expected. Published in Nature Astronomy, the findings could challenge the widespread assumption that the mass distribution of a population of star-forming cores is identical to that of the stars they spawn.

In space, hidden behind the dusty veils of nebulae, clouds of gas clump together and collapse, forming the structures from which stars are born: star-forming cores. These cluster together, accumulate matter and fragment, eventually giving rise to a cluster of young stars of various masses, whose distribution was described by Edwin Salpeter as an astrophysical law in 1955.

Astronomers had already noticed that the ratio of massive objects to non-massive objects was the same in clusters of star-forming cores as in clusters of newly-formed stars.  This suggested that the mass distribution of stars at birth, known as the IMF1 , was simply the result of the mass distribution of the cores from which they formed, known as the CMF2 . However, this conclusion resulted from the study of the molecular clouds closest to our Solar System, which are not very dense and therefore not very representative of the diversity of such clouds in the Galaxy. Is the relationship between the CMF and the IMF universal? What do we observe when we look at denser, more distant clouds?

These were the questions asked by researchers at the Grenoble Institute of Planetology and Astrophysics (CNRS/Université Grenoble Alpes) and the Astrophysics, Instrumentation and Modelling Laboratory, (CNRS/CEA/Université Paris Diderot)3  when they started to observe the active star-formation region W43-MM1, whose structure is far more typical of molecular clouds in our Galaxy than those observed previously. Thanks to the unprecedented sensitivity and spatial resolution of the ALMA antenna array in Chile, the researchers were able to establish a statistically robust core distribution over an unmatched range of masses, from solar-type stars to stars 100 times more massive. To their surprise, the distribution did not obey Salpeter's 1955 law.

It turned out that, in the W43-MM1 cloud, there was an overabundance of massive cores, while less massive cores were under-represented. These findings call into question not only the relationship between the CMF and the IMF, but even the supposedly universal nature of the IMF. The mass distribution of young stars may not be the same everywhere in our Galaxy, contrary to what is currently assumed. If this turns out to be the case, the scientific community will be forced to re-examine its calculations about star formation and, eventually, any estimates that depend on the number of massive stars, such as the chemical enrichment of the interstellar medium, the numbers of black holes and supernovae, etc.

The teams will continue their work with ALMA within a consortium of around forty researchers. Their aim is to study 15 regions similar to W43-MM1 in order to compare their CMFs and ascertain whether the characteristics of this cloud can be generalised. 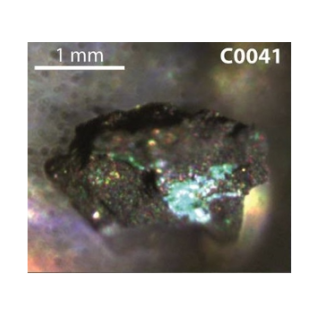