Sprites, elves, jets… few people know that scientists habitually use such other-worldly words to describe transient luminous events or TLEs, light flashes that occur during active storms just a few tens of kilometres over our heads. Few people also know that storms can act as particle accelerators generating very brief bursts of X-rays and gamma rays. But what are the physical processes and mechanisms behind these phenomena discovered barely 30 years ago? Do they impact the physics and chemistry of the upper atmosphere, the environment or even humans? Such are the questions facing the French Taranis satellite that will be riding aloft during the night of 16 to 17 November atop a Vega launcher from the Guiana Space Centre, an all-French mission involving research scientists from CNES, the national scientific research centre CNRS, the atomic energy and alternative energies commission CEA and several French universities.

TLEs and terrestrial gamma-ray flashes (TGFs) are seen all over the world where storms occur. But because we don’t know enough about them, they don’t feature in the toolbox of climatologists and meteorologists. Are they implicated in the increasing number of extreme weather events? If so, they could be modelled and factored into forecasts in real time. Although Taranis is first and foremost a fundamental research satellite, the data it is set to deliver on Earth’s thermal and climate mechanisms could serve more operational applications like climatology and weather forecasting.

Elves, sprites, sprite halos, blue jets and even pixies or gnomes are just some of the whimsical names given to the range of phenomena in the generic family of TLEs—a poetic lexicon that contrasts sharply with their violence. These ephemeral upper-atmosphere events occur between the tops of storm clouds and an altitude of 90 kilometres. First predicted as early as 1920, their existence was not confirmed until the nineties. They have since been recorded by numerous ground and space observations. Elves take the form of an expanding glow of light, appearing at an altitude of 90 kilometres and lasting no more than one millisecond; an active storm may produce thousands of them in the space of a few hours. Occurring between 40 and 90 kilometres above Earth’s surface, sprites have a complex structure of branches and tendrils and can last for up to 10 milliseconds. Blue jets appear at the top of storm clouds and propagate to altitudes of up to 50 kilometres. Occasionally, ‘gigantic’ jets may propagate up to 90 kilometres.

TGFs were first observed scientifically in 1994 by the Compton Gamma-Ray Observatory (CGRO), a NASA spacecraft deployed from the U.S. space shuttle Atlantis. In certain conditions, storms generate a very short burst of gamma photons. TGFs were for a time considered a rare occurrence accompanying sprites; we now know they are generated by electric activity in clouds. For lack of the right instruments, the Italian AGILE satellite (2007) and U.S. Fermi space telescope (2008) were unable to fully confirm current hypotheses on the mechanisms that generate them or estimate their number. Taranis will therefore bring new insights into how they are generated and their radiation impact, which has never been measured before.

In France, the atomic energy agency CEA first turned its attention to these transient events and their impact in 1993. On 9 December 2010, the project got the official go-ahead from CNES’s Board of Directors. Taranis is an all-French mission with science goals set by French research laboratories. In addition to CEA, CNRS is closely involved through several of its affiliated research laboratories1 : the LPC2E environmental and space physics and chemistry laboratory is coordinating development of the science payload, is responsible for the science mission centre and is contributing instruments; the IRAP astrophysics and planetology research institute, the LATMOS atmospheres, environments and space observations laboratory and the APC astroparticles and cosmology laboratory are contributing to the payload. Other instruments on Taranis include outside contributions from Stanford University and Goddard Space Flight Center (GSFC) in the United States, the Institute of Atmospheric Physics (IAP) and Charles University in the Czech Republic and the Space Research Centre of the Polish Academy of Sciences (CBK). CNES is funding the programme to the tune of €110 million. 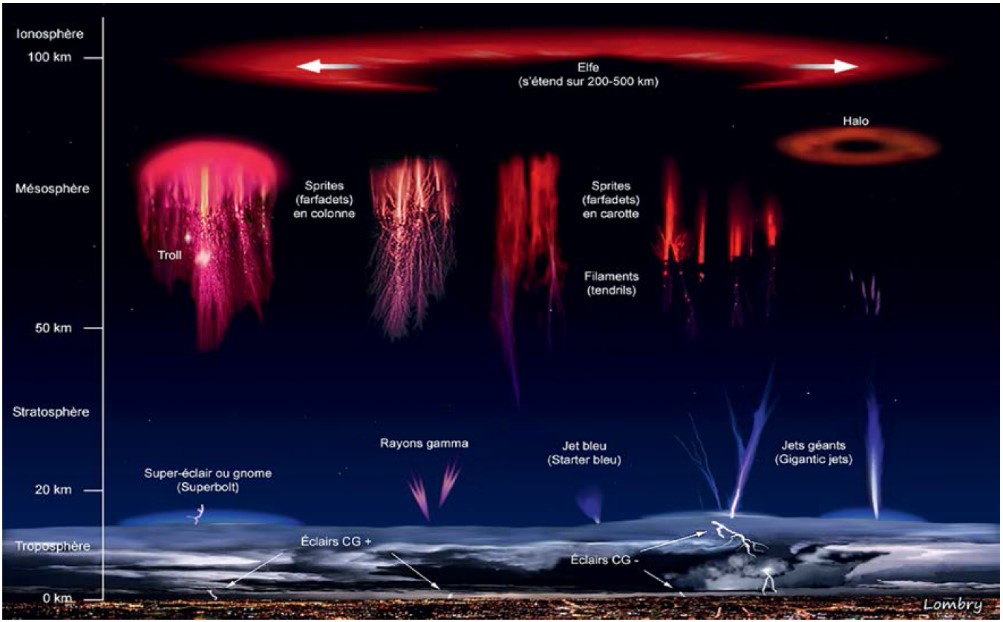 Taranis looks somewhat different, as in place of the aluminized or gold-plated Mylar insulation traditionally used on satellites it is coated with a special black and white paint. This is not just attention to aesthetic detail, the purpose of the paint being to avoid interfering with the surrounding electric field and prevent reflected light disrupting the optical sensors. A less visible but key feature is the original design of its payload, comprising eight instruments operated as a single unit thanks to MEXIC, the brain of Taranis that powers and synchronizes the instruments and manages the payload, executes the trigger strategy to capture an event and even handles the transfer of selected data to mass memory

For two to four years, Taranis will scan regions of the sky where storm activity is intense and the probability of seeing TLEs and/or TGFs high. While it may be a national programme, its results are eagerly awaited by the wider international scientific community. In atmospheric chemistry and physics, environmental science, climatology, high-energy astrophysics and many more fields besides, Taranis is set to reveal new insights—and science efforts won’t end there, as the mission will undoubtedly pave the way for future investigations.

CNRS News "Probing the hidden side of thunderstorms"